I finally decided to make my desktop my own, after forever and a day of having standard everythings. I’m not usually one to have awesome looking desktops, but I think I did good. Here is a screen capture of my current desktop. Click for a larger version 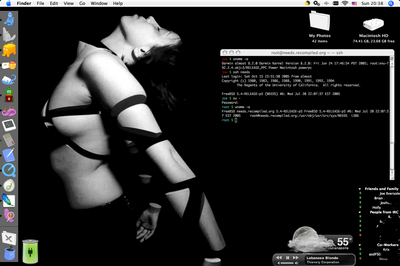 Anyway, the dorks will want to know all of the specifics. Icons are the Somatic set from IconFactory installed using CandyBar. I’m also using a battery and weather widget from Konfabulator on the desktop. Adium X is down there for instant message in the lower right (cut out some of the info for obvious reasons, natch.) Subtle Tunes is the music interface for iTunes (also a Konfabulator widget). Terminal.app has some transparency in the background but you can’t see it because I didn’t want to screw up the view of the awesome background.

I have always been a coffee snob since I started drinking coffee.…